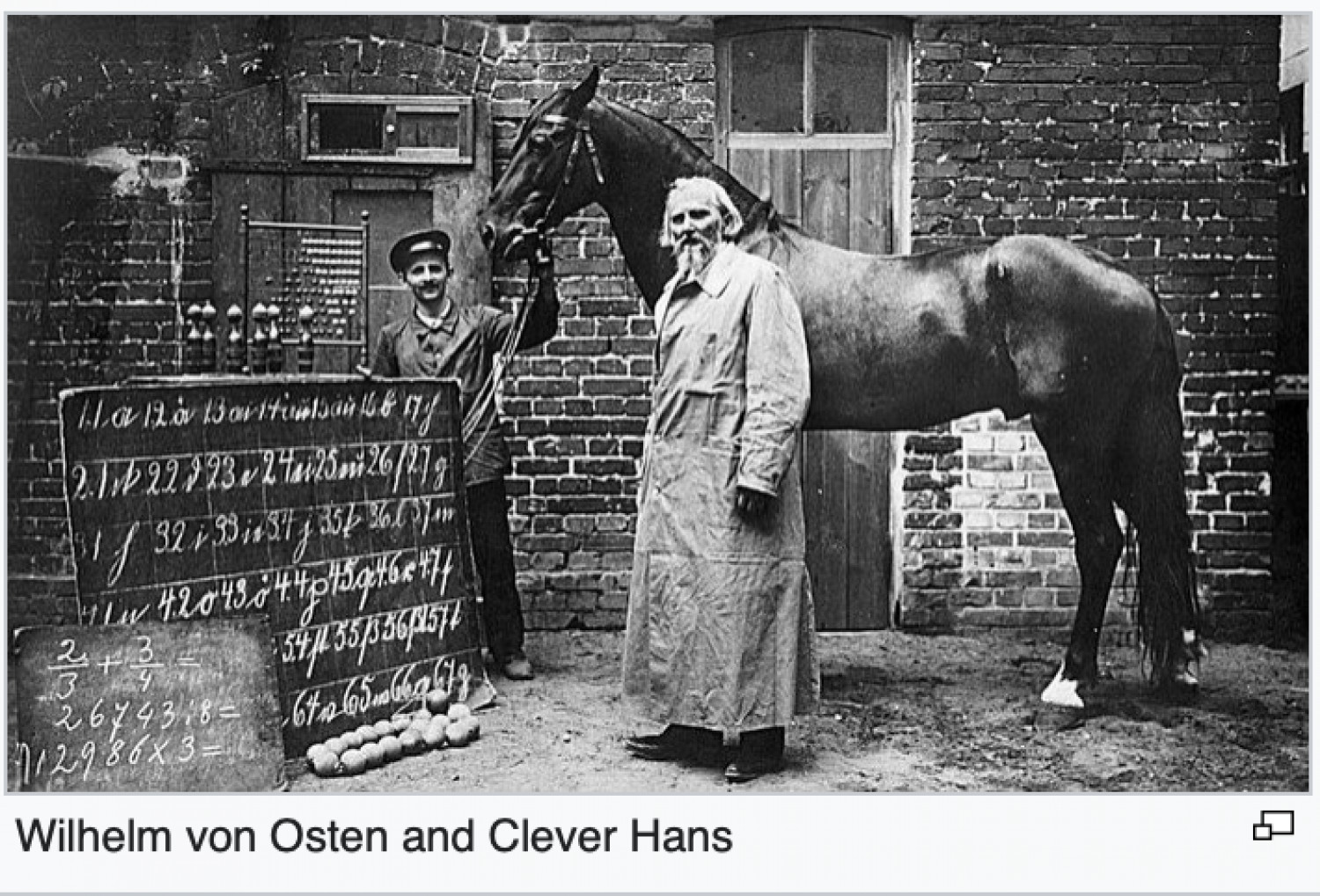 Although this story is well known and has led to significant advancements in the design of experimental research studies, most of this effect has been categorized as deleterious, leading to the use of double blind studies and the control of various forms of bias (e.g. observer-expectancy effects). But if this story is taken in a different direction, it could well prove to be a useful artifact for helping students respond to problem solving prompts.

Basically, van Osten owned Clever Hans, an Orlov Trotter horse, and claimed that the horse could count. “Hans was said to have been taught to add, subtract, multiply, divide, work with fractions, tell time, keep track of the calendar, differentiate between musical tones, and read, spell, and understand German” (https://en.wikipedia.org/wiki/Clever_Hans). The horse answered by tapping its hoof to count out the answer. Later, under investigation, it was documented that the correct answer could only be provided when the questioner knew the correct answer and was visible to the horse. Basically, the questioner was providing prompts to cue the horse when to stop tapping.

In WRN, the problem-solving process begins with development of a prompt. In a different blog, we described prompts as having specific intellectual operations. Another aspect of the prompt, however, is its architecture. Prompts can be considered to have three parts (see example below). They should begin with a context that provides sufficient information for the student to write with an audience in mind and frame their response inside a situation (red font). The middle part (blue font) should focus on the intellectual operation and orient the student to the depth/breadth of their response. Finally, the last part presents/anticipates the kind of concepts (and vocabulary) the student is to use in their response. Following is an example of a prompt designed for a university course entitled “Evidence-Based Decision Making” that is taken by Master’s degree students.

You have been asked to research a topic related to your eventual thesis. The first step involves outlining important aspects of any kind of empirical research, whether it is a specific intervention or an evaluation of a program. Briefly describe the technical adequacy issues you need to address in designing and conducting your research. You can list various questions or critical issues that you would consider to ensure your study provides the right kind of evidence for making sound decisions. Consider all you have learned in this course that deals with study design, reliability, validity, and decision-making.

Moral of this blog: Setting clear expectations for students provides a solid foundation for them to use in framing their responses. These expectations are delivered not just in the classroom overall, but in the prompts being used to document student problem-solving proficiency.